How to filter out unprofitable or risky Harmonic Patterns. 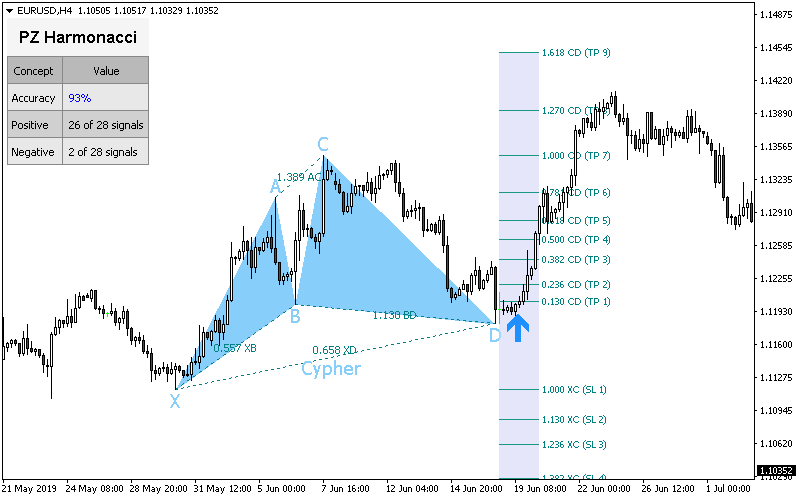 The Harmonacci Patterns Indicator displays suitable stop-loss and take-profit levels for each pattern, and these levels can and should also be used to discard exhausted price patterns upon breakout.

For example, the following Gartley Pattern is already exhausted when the breakout happens. The breakout bar reached eight out of the nine suitable TP levels in just four hours. This pattern is exhausted and we should not trade it.

In fact, such a fast price movement to the 1.270 CD projection would suggest that going short might be a good idea. Should you be able to confirm a short bias in higher timeframes, shorting instead of buying would seem appropiate.

However, the following Flying Fox Pattern is indeed suitable for trading. Upon breakout, only the second TP level has been reached, leaving seven more suitable exit levels for our trade and minimizing the risk of trading. The following buy signal should be taken.

The goal of trading only patterns with lots of upside are twofold. First, we are decreasing the odds of costly drawdowns and secondly, we are maximizing our profit factor by using free margin wisely.

Filter out Harmonacci Patterns by counting how many profit-targets are pending at the time of trading. A higher number of pending profit targets increases the odds of closing a profitable deal. Discard trades with many profit targets already met.

Feel free to post your comments or questions below. Thank you.

12 thoughts on “How to filter out unprofitable Harmonacci Patterns”