The world discovers the price of commodities via the futures market, where different commodities can be bought and sold almost 24 hours a day. Each transaction represents a contract, at the end of which, the underlying commodity has to be physically delivered or settled in cash. This price discovery mechanism makes complete sense to find the market value of commodities, but utterly fails for Gold and Silver.

To find out why this is the case, we first need to explore the concept of marginal utility, which will shed light on how the futures market is structured and why.

What is marginal utility?

The Webster Dictionary defines marginal utility as “the amount of additional utility provided by an additional unit of an economic good or service”, which is a perfectly good definition.

Let me clarify this concept using a few rhetoric questions:

In other words, the first hammer renders a second hammer useless, whereas the first apple does not render the second apple useless. You need many more apples to render the next ones useless, depending on your appetite.

The same could be argued about any commodity traded in the futures market. Commodities have a decreasing marginal utility because time and increasing quantity decreases the value of the subsequent items.

The marginal utility of currency

However, currency in general has a much higher marginal utility than commodities. In other words, how many $100 bills would you like to have at any point in time? The answer of course is as many as possible, because each subsequent bill does not lose value relative to the amount you already have.

Therefore currency has a much higher marginal utility than commodities, and it is accepted to settle debts and contracts. This is the reason why the futures market properly discovers the value of commodities.

However, the marginal utility of currency is not constant. Central banks constantly increase the currency supply causing inflation, and currencies lose value over time. Given enough time, the value of a currency will tend to zero. In other words, currency rots slower than apples, but it does indeed rot. 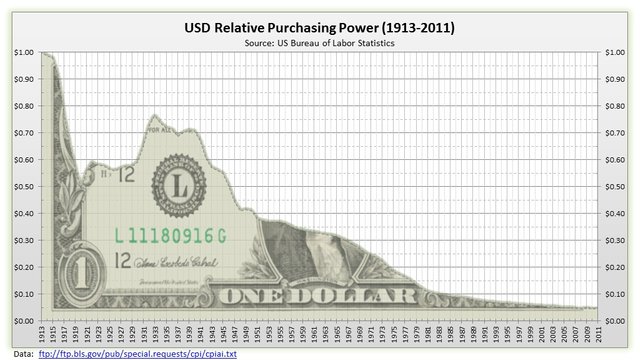 The marginal utility of Gold

Gold, on the other hand, does not rot or oxidize: it holds its physical properties forever. Gold can be melted down and divided, but not destroyed, as it does not react with any element of the periodic table. Additionally, no human action can decrease the amount of Gold that exists on planet earth.

For all the above reasons, Gold has constant marginal utility because regardless of the amount in your possession, you’ll never lose value over time. No other asset in the world has a higher marginal utility than Gold.

Gold will outlast and retain its value longer than any currency. 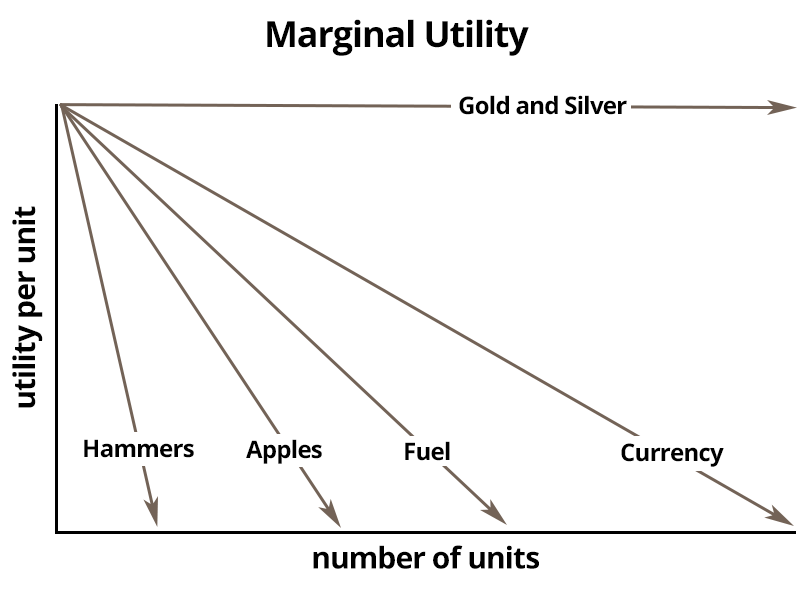 Now let’s explore the role of marginal utility in transactions.

Which is bidding for which?

Have you ever wondered why the party giving up currency is regarded as the buyer on every transaction and not the seller? After all, if you give up your dollars for other goods or services, you are selling dollars.

It is acknowledged that for any given market transaction, there is a seller and a buyer. But how do we determine who is buying and who is selling? We do so gauging the marginal utility of the items being exchanged.

For instance, since cash has greater marginal utility than bananas, that who buys bananas paying in cash is buying and the other is selling. The same happens with soybeans, corn, meat, oranges, oats, iron, copper, etc.

What if you were exchanging your bananas for a hammer? Well, since bananas have greater marginal utility, you would be the buyer and the other party would be the seller.

And if you were exchanging steel for soybeans? The same happens, steel has a higher marginal utility than soybeans and thus, you would be the buyer.

Extrapolating these examples leads to an inescapable conclusion: the entity holding the highest marginal utility is the bidder, and the other is the asker. And it makes sense because time preference plays a favorable hand to the bidder and puts pressure on the asker.

Is the futures market functional?

Given the marginal utility of currency and commodities, we can safely assume that the futures market is an effective price discovery mechanism for commodities that have less marginal utility than currency, because the time preferences are baked in the settlement options.

In other words, currency bids for commodities that can be physically delivered or settled in cash. If the contract is settled in cash, the bidder receives the current market value of the underlying commodity, plus an additional time window to buy it provided by the currency.

But what happens if the asset being traded is Gold?

As we previously discussed, Gold has greater marginal utility than currency. Therefore a market structure that assumes that currency bids for Gold is incorrect and puts the car before the horse. It is Gold that bids for currency, and not the other way around.

For the futures market to be a functional price discovery mechanism, it should invert the relationship between Gold and currency. Namely, Gold should bid for currency in a symbol in which Gold is the denominator (for example USD/XAU), and the payment -the physical gold- should be delivered upon the contract being created.

The above might seem trivial but think about it for a second. How would you feel if you secure a contract for a ton of steel and the contract got settled in lettuce or soybeans instead? You would be outraged, of course, because you received the same market value but deprived of the marginal utility you once had, as the lettuce will rot long before you can buy the steel you originally wanted.

What if you order a car from a dealership and are delivered soybeans or orange juice instead? Same story. You received the same market value but deprived of marginal utility.

Then why are you happy when you secure a contract for Gold and get paid in currency instead? You should be rightfully outraged just like in the previous examples.

The futures market is not functional and it is not a valid price discovery mechanism for monetary assets like Gold and Silver, because the contract structure inverts the time preferences derived from the marginal utility of Gold, Silver and currency.

The gold futures market is a financial fallacy that has the whole world trading gold and silver to make dollars, unwillingly giving up marginal utility on each contract, hiding the true value of these monetary assets under a mattress of marginal-utility-deprived settlements.

But the tail does not wag the dog and what can’t go on forever, won’t. Eventually, Gold will run out of reasons to bid for currency, physical deliveries will be called-in, and there won’t be enough gold to satisfy the outstanding contracts. At this point, the price of future gold will go to zero because it can’t be delivered, and the price of physical gold will literally be incalculable, as the price discovery mechanism for physical gold does not currently exist.

But just how close are we to that event? It is impossible to predict, but we can get a very good idea using the Paper to Gold ratio and the Paper to Silver ratio, which we’ll examine in other blog post.

Ironically, we won’t know the true value of Gold and Silver until the price discovery mechanism we have devised to find it, fails.

No votes so far!

We are sorry that this post was not useful for you!